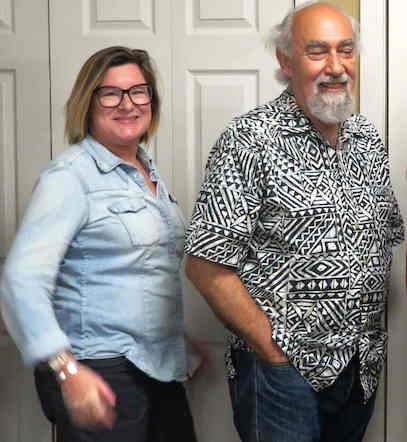 This broadcast preview of Rhapsody in Blue ("Revelry for the Resistance's Sake!") is hosted by Rag Radio's Glenn Smith and Thorne Dreyer, and features storyteller Luis Guerra (of NPR’s Latino USA fame, and the slam poetry of poet and political activist Genevieve Van Cleve.

The event, Rhapsody in Blue -- a celebration of music, poetry, storytelling, and art with and for the progressive political community – took place Thursday, May 10, 7-9:30 p.m., at The High Road on Dawson in Austin. Progress Texas and the New Journalism Project cosponsored the High Road event. Photo above: Sydney Wright, at left, Ty Richards, and Andy Macintyre in the KOOP studios in Austin, April 27, 2018. Photo by Roger Baker / Rag Radio. Rag Radio is produced in the studios of KOOP 91.7-FM, an all-volunteer, cooperatively-run, solar powered community radio station in Austin, Texas, in association with The Rag Blog and the New Journalism Project, a Texas 501(c)(3) nonprofit. It is streamed live on the Internet at KOOP.org and Radio Free America. The host and producer of Rag Radio, Thorne Dreyer, is a prominent Austin-based activist and writer who was a pioneer of the ’60s underground press movement. The show’s engineer and co-producer is Tracey Schulz and the staff photographer is Roger Baker. The syndicated show is broadcast (and streamed) live Fridays, 2-3 p.m. Central) on KOOP, and is later rebroadcast and streamed on WFTE-FM in Mt. Cobb and Scranton, PA., on Houston Pacifica's KPFT HD-3 90.1, byKKRN, 88.5-FM in Round Mountain, CA, and at WALHRadio.com in Wilmington, OH -- and as a featured podcast at Veterans Today. Learn more about Rag Radio here.Running time: 54:57
Contact: ragradio@koop.org.